"A type of malicious software designed to block access to a computer system until a sum of money is paid"
Home / IT / What Is Ransomware? 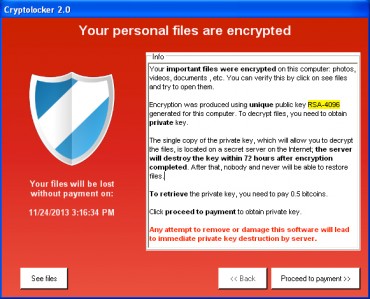 Ransomware is the new hot threat everyone is talking about; what do you need to know?

As antivirus vendors and security professionals continue to make headway against global malware campaigns on a daily basis, hackers have been looking for more inventive ways of keeping their revenue streams strong without relying on standard credit card fraud techniques.

The result of this effort has come in the form of new viruses like Cryptolocker, Cryptowall, and more recently, TeslaCrypt, which are all members of an increasingly popular family of infections known as “ransomware.” The earliest known version of ransomware, called CryptoLocker, first debuted on the scene around the tail end of 2013, and hit so hard the Internet barely had enough time to figure out what it was dealing with in the first place.

In what seemed like no more than a week, a flood of users were reporting that a new, unknown style of virus had locked down their hard drives, and was demanding a healthy ransom to return control of their most prized files and folders. By capitalizing on the relatively unknown nature of its infection style, ransomware was able to sweep through tens of thousands of computers in a matter of days, spreading through established botnets and infecting users via standard phishing links embedded in email attachments and untrustworthy downloads.

Unlike classical malware that installs keyloggers, backdoors, or trojans on a computer in the hopes that a user would eventually type in the details of a credit card or other personal information that could later be used or sold, CryptoLocker and its many subsequent variants offered a simple, and reliable revenue stream that the underground market could capitalize on to fund other, less-profitable operations.

Amounts demanded for the ransom would vary wildly depending on the criminal ring behind it, anywhere from $25 to $600, almost always paid either in Bitcoin, or sent through MoneyGram onto untraceable prepaid cards in Eastern European nations.

How to protect yourself

Over the last 12 months we, at Automate, have seen a huge increase in the amount of attempted and successful ransomware attacks. There are two simple solutions to ensure that you do not become a victim of ransomeware attacks, although one is a lot riskier than the other.

The first thing you can do is wait and see if you are targeted by an attack. And if you are targeted hope that your Anti-Virus Software has been able to come up with a solution for this specific virus. What started off as an unstoppable monster that would effortlessly make it’s way from computer to computer is now quite a bit more manageable and many Anti Virus Vendors have been able to provide fixes that they make available to download.

That being said, new types of ransomware are being created on a daily basis which makes it nearly impossible for Anti Virus Companies to keep up with every type of ransomware in real time. If you are unlucky enough to be hit by a new type of ransomware, the chances of getting your data back without giving in to the hacker’s requests are very low.

The next method is much more secure and in our experience the only way to protect yourself,

Ransomware exposes people’s unwillingness to back up their most valuable data and files to an environment completely separate from their PC or Laptop. By not creating copies of your documents, this type of malware can hold these files hostage and expect you to pay their ransom because it is the only copy of these files that you have.

By making a back up of your operating system and all it’s contents onto an external hard drive that is then disconnected from your machine, you completely mitigate the risk of ransomware by circumventing the exploit it uses to get you to pay the ransom in the first place.

Alternatively, if you do not want to have to plug in a hard drive each day there are many cloud back up solutions that can be scheduled to run automatically every night. Find out more about these in our article on back ups.

When ransomware first appeared it surprised everyone and effortlessly swept through thousands of computers. Since then computer and anti virus providers have adapted and created fixes to try and mitigate the risk of this type of malware.

With that said the only way to be sure that you will not be affected by ransomware is to ensure that you have a constant back up of your data.